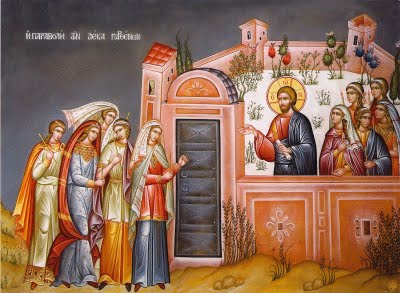 Good morning! My name is Areeta and I am a student from Trinity College, doing a placement here at Holy Trinity for the fall semester. It has been a great privilege to worship with you and to participate in the life of this community.

When I read over the passages for today –I groaned internally. Harsh prophecy voicing God’s dissatisfaction, Paul’s concrete description of the Second Coming – topped off with a judgment parable! Each individual piece evokes discomfort – and together they amplify that discomfort.

From what I know of this community, I imagine that I am not alone in these sentiments.

The parable that we heard today is unique to Matthew, who has a particular affinity for the final judgment. The author was struggling with the same issue Paul was trying to address in his letter to the Thessalonians: why has Jesus not returned yet? If the Thessalonian community was anxious, then the Matthean community was even more anxious about 30 years later. And here we find ourselves in the third millenium of waiting, perhaps not entirely sure what we are waiting for.

While preparing for this sermon the other issue I bumped up against was figuring out how to preach on a parable. A friend cautioned against thinking about parables as allegories (even though the commentaries I read argue for reading this parable allegorically). A preacher’s blog I read had a top 10 list of things not to do when preaching on a parable. One of the reassuring tips was: if you feel perfectly confident and untroubled while expounding the parable, you’re probably doing it wrong. Another tip (that actually appeared twice on the list) was: don’t assume that you’re the goodie in the story (and that other people are the baddies). Finally, Frederick Buechner, an American writer and theologian, commented that “if we think the purpose of Jesus’ stories is essentially to make a point as extractable as the moral at the end of a fable, then the inevitable conclusion is that once you get the point, you can throw the story away like the rind of an orange when you have squeezed out the juice.”

So tucking these suggestions in my pocket and relieving myself of the pressure of trying to find “the” point of this parable, I’m going to offer you some reflections on what this parable might be saying to us.

Jesus tells this parable fairly close to the end of his life. It is one of the last parables he tells us in Matthew, and relates to Jesus’ earlier warning to the disciples: “therefore, you also must be ready, for the Son of Man is coming at an unexpected hour” (Matt 24:14).

At the end of the parable, Jesus says: “So stay awake, for you don’t know the day or the hour.” The word ‘awake’ might also be translated as ‘be prepared’ or ‘be vigilant.’ Indeed, all the attendants fell asleep, the issue is that the foolish ones were not prepared.

In contemplating the parable, I realized that what happened is that the bridal party arrived at the house where the attendants were waiting, but the foolish ones had gone out to search for oil. Then they had the oil but had missed the procession to the groom’s house. It seems like they were constantly preoccupied with something that prevented them from being present. And that is perhaps one of the most difficult things about waiting: being present.

By definition a waiting period is time that you spend anticipating another event. That time spent waiting is of secondary importance relative to the moment that the anticipated event happens. This is especially the case with life changing events – like weddings. Depending on how elaborate the wedding is, the time before the wedding can be consumed with wedding preparations. For some people focusing on the logistics to avoid being present can be a coping mechanism – like in the case of a funeral. Focusing on the logistics of organizing the funeral events can be comforting – providing a sense of control and gives the organizers something to do while the reality of the loss sinks in.

But there can be great value in being present. Thich Nhat Hanh is a Vietnamese Buddhist monk, poet, scholar and human rights activist, who was nominated for the Nobel Peace Prize. He has written several books, one of which is called ‘Peace begins here’ providing a Buddhist perspective on resolving conflict. In this book, he describes an incident involving a student of his, an American soldier in Vietnam. He describes a meditation practice where the group invited this student to speak about his experience. In these meditation group sessions, they practiced what he calls ‘deep listening.’ The student could not speak for two days, but on the third day he managed to tell the story of how his unit got caught in an ambush in Vietnam. Most of his unit was killed – only he and a few others survived. In revenge this young man killed five Vietnamese children with poisoned sandwiches. Later that evening, Hanh invited the student to his room for a conversation. In the course of the conversation he says: “Okay, you killed five children. I recognize that. But why don’t you see that you can also save five children – you can do it today… you have your intelligence, your education, you can go out at this very moment and save children who are dying. Why do you allow the past to overwhelm you and imprison you so that you cannot be alive in the present moment?”

Reading Thich Nhat Hanh’s response to his student really surprised and disturbed me. But I think it relates to an important theme in this section of the gospel, which is that the love of God continues to appear in our lives in surprising and unexpected ways, in this case providing the student with the redemptive possibility of living in a different way, integrating his terrible past into the present to create hope for himself and for others. The past couldn’t be fixed, but the acknowledgement of the past, the acceptance of that reality through the compassionate presence of others, allowed the student to begin a journey of healing.

In the gospel, the bridal party is delayed and arrives at an unexpected hour. But the good news in this parable is that bridal party is coming, although we might not know how or when or even what that might look like. And that affirmation of the arrival of the bridal party is nourishment for hopeful expectation – with a future and a present dimension. It nourishes the hope that God continues to love the world with gentle providence, continuing the process of creation until the project is complete, and will continue to redeem and save the world by coming into it with love and grace.

May we learn to live being present to God’s transformative presence in the world and in our lives.

We’ll have a kind of cafe gathering every Wednesday from 2:30-3:30pm. Someone will be the host and be online that whole time and folks can drop in and visit at any point during that time. … END_OF_DOCUMENT_TOKEN_TO_BE_REPLACED
View Calendar
Add