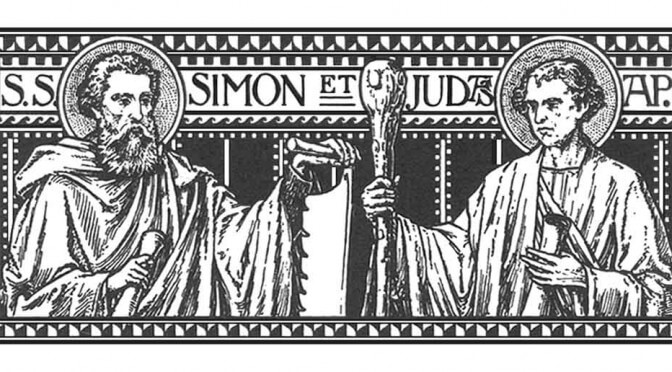 October 28th is the Feast of Saint Simon and Saint Jude. It was on the eve of this day in 1847 that the Church of the Holy Trinity was consecrated. At the midweek Eucharist today we remembered Simon and Jude, and as I was reading aloud the biographical comment in For All the Saints, I realized how appropriate they are as patrons. “Simon was called ‘the Zealot,’ which suggests that he once belonged to the Jewish resistance movement. …Jude is considered the patron saint of what is shunned by the world, especially lost causes and those who suffer from incurable diseases.” [p. 318]

On Wednesdays, in place of a homily, we have a group reflection on the appointed scripture readings, on the person/s being commemorated, or on what God is doing in our lives or the world around us. The gospel reading from John 15 included this passage: “If they persecuted me, they will persecute you.” One of the Wednesday regulars, Matt McGeachy, related the time from his university experience when the journalist June Callwood spoke to his class about the first time she was arrested for her social justice activism. Ms Callwood was participating in a demonstration on Bloor Street when she saw the police grab a black man and pull him into an alley to give him a beating. She went into the alley and demanded to know why they were doing this. They told her it wasn’t any of her business. She responded that they were public servants–members of the Toronto Police Services–so yes, it was her business. She was arrested for obstructing the police in the performance of their duties. (No cell phone videos in those days.)

This coming Sunday is All Saints’ Day. One of the readings in the liturgy is from Elaine Ramshaw’s Ritual and Pastoral Care:

“History is usually the story of conquerors, where greatness is measured in wars won and peoples subdued. Will Cuppy had this in mind when he wrote of Alexander III of Macedonia: “He is known as Alexander the Great because he killed more people of more different kinds than any other man of his time.” The church, on the other hand, remembers a different sort of hero. The liturgical year commemorates saints who suffered unjustly, or who alleviated or prevented the suffering of others. July 4 is now the feast day of Isabel (Elizabeth) of Portugal, who prevented several wars by convincing her royal relatives to negotiate rather than set their peasants to slaughtering each other. . . . Then there is Hugh of Lincoln, who refused to accept the office of prior until the king had housed and fully compensated every peasant who had been evicted in order to build the new monastery, and who alone faced down and quelled anti-Semitic lynch mobs, so that at times there were Jew-murdering riots in every major English city except his diocese of Lincoln. .  . . Rather than see such people as human-interest sidebar stories in a history focused on the wielders of power, the liturgical calendar puts them in centre stage of the history that matters.”

I am so grateful to be connected to that Communion of Saints across time and space and to be inspired by their witness as I live in my time and place.