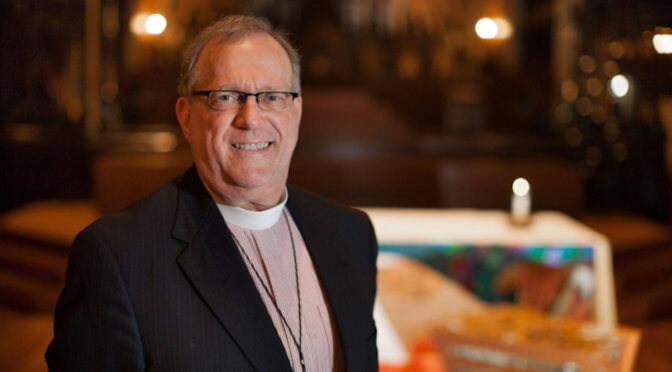 On Holy Tuesday, April 7th, I observed that my last Sunday at Holy Trinity, Trinity Sunday, was exactly two months away. And then I realized that my last service will probably be streamed online, and that I would likely be retiring without being able to hug anyone goodbye or have lunch or dinner with anyone to say thank you and adieu. We all grieve  in our own way, and the spectrum of losses in a time of pandemic is wide.

It is difficult to see outside the picture frame at the moment. I am old enough to remember when AIDS and HIV infection were called GRID (Gay Related Immunodeficiency Disease), and since the early 1980s we have learned a lot about HIV. In time, drug therapies were developed. I remember Dr. Anthony Fauci’s name from those days, as he was on the front lines back then as well. Nowadays,  living with HIV is a lot like living with diabetes.

Yet, there are blessings, too. Worshipping by Zoom means we can see people in real time anywhere in the world who have been part of the HT community. Many have transitioned to using technology in ways they had never done before. There is a New Yorker cartoon showing an old Jewish couple at their Passover table with a Zoom screen of their extended family in front of them along with the bitter herbs and matzoh. Last night, as I Skyped with my daughter, Claire, in Vancouver, she convinced me to download Monopoly for iPad, so we can play sometime. Imagine what going through a pandemic would have been like before there were telecommunications!

At the Vestry Executive  Committee meeting this week, one of the questions that surfaced was How will the pandemic affect how we go about doing ministry after the ALL CLEAR? It is too soon to say, of course, but it is something we all might be thinking about. Somehow, “business as usual” doesn’t sound quite right.

It was sobering to read that 80% of people who contracted Covid-19 in China were infected by people who were asymptomatic, so stay safe and be careful.

I will leave you with the encouraging words of St Paul to the church at Corinth:

We are gathering online for the foreseeable future. The exact shape of things will change, but you can see some past ones to get a sense. If you would like to join in click here … END_OF_DOCUMENT_TOKEN_TO_BE_REPLACED
Jun
4
Thu
7:15 pm Lifting Spirits – music, poetry ... @ the Internet
Lifting Spirits – music, poetry ... @ the Internet
Jun 4 @ 7:15 pm – 8:45 pm

We are gathering online for the foreseeable future. The exact shape of things will change, but you can see the first one to get a sense. If you would like to join in click here … END_OF_DOCUMENT_TOKEN_TO_BE_REPLACED
View Calendar
Add