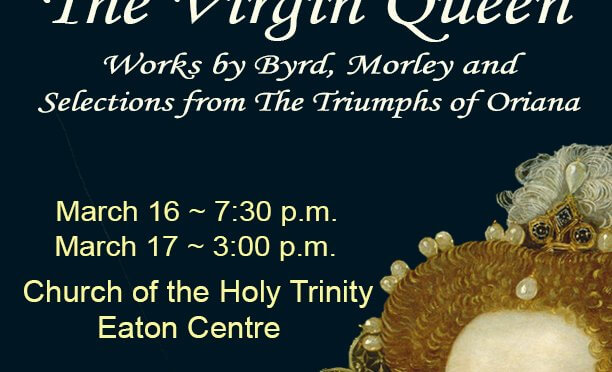 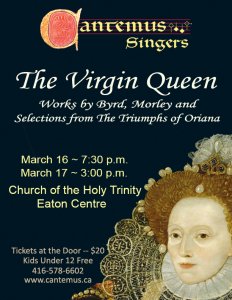 By the turn of the 17th century and after 40 years on the throne, Elizabeth I had clearly established herself as a strong monarch, having thwarted several uprisings, disposed of potential rivals such as Mary Queen of Scots, and crushed the Spanish Armada.  All this while remaining unmarried.

In an era when a powerful unwed queen was almost unheard of, it is not surprising that a cult developed around Elizabeth’s marital status, with poets and artists depicting her as a virgin or a goddess or both.  Musically, the culmination of this cult worship was a collection of 25 madrigals called the Triumphs of Oriana [Oriana was a poetic name used for Elizabeth], written in honour of the Queen in 1601 by Thomas Morley and 22 other prominent composers of the day.  The collection was modeled on a similar Italian collection called Il Trionfo di Dori (The Triumph of Doris), a set of madrigals assembled to commemorate the wedding, and celebrate the wife of a wealthy Venetian nobleman.

Join us on March 16th and 17th for our concert “The Virgin Queen”, at which we will present selections of both collections and other famous English madrigals, as well as one of the most important religious works of the Elizabethan period, William Byrd’s Mass for Four Voices.  Composed in 1592, likely for performance in private households that were secretly Catholic, it represents the brilliant culmination of the English Catholic musical tradition that was extinguished by Henry VIII and his Protestant successors.  The sublime Agnus Dei of this Mass is considered one of the masterpieces of the period.

We hope to see you there! 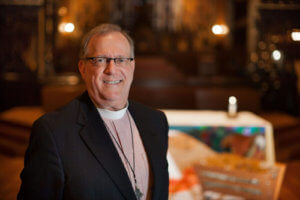 Program Outline – Sherman Hesselgrave Event Join us Friday, June 5 to celebrate Sherman‘s ministry and to say farewell As most of you are aware, the Rev. Sherman Hesselgrave is retiring from Holy Trinity Church … END_OF_DOCUMENT_TOKEN_TO_BE_REPLACED
Jun
7
Sun
10:30 am A Disparate Gathering – Sherman’...
A Disparate Gathering – Sherman’...
Jun 7 @ 10:30 am – 11:30 am

We are gathering online for the foreseeable future. The exact shape of things will change, but you can see some past ones to get a sense. If you would like to join in click here … END_OF_DOCUMENT_TOKEN_TO_BE_REPLACED
View Calendar
Add