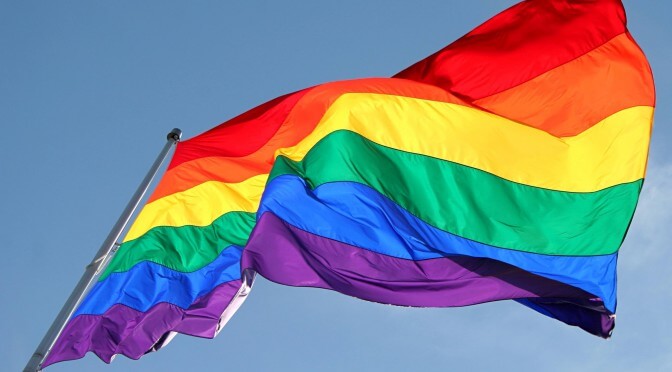 The congregation of Holy Trinity Anglican parish in downtown Toronto extends a warm welcome to those gathering from around the globe for the celebration of World Pride. Our church has a long history of welcoming lgbt folk and taking action for justice for gays, as you will see from the timeline that follows.

Please join us for worship if you wish on Sunday, June 29 at 10:30 a.m. We anticipate welcoming Davis Mac-Iyalla, a Nigerian gay activist now living in the United Kingdom because of the danger to him in Nigeria, who will preach.

Early 1970s- Holy Trinity offers use of the nave to Community Homophile Association of Toronto (CHAT) for dances.

Mid-1970s- Metropolitan Community Church holds services at Holy Trinity before relocating after the fire at HT in 1977. 1985- October- Alison Kemper preaches at Holy Trinity, coming out to congregation that she and her partner, Joyce Barnett, have both left their positions as deacons and that Joyce is pregnant. The congregation receives the news “with applause and embraces,” Alison wrote later.

1985- Christmas I – Joyce preaches on the Incarnation, speaking of the baby she is carrying. An anonymous member of the parish reports her to Archbishop Lewis Garnsworthy.

Feb. 12, 1986- Joyce and Alison are summoned to meet with Archbishop Garnsworthy. Holy Trinity parishioners gather for the Ash Wednesday service, offering them support.

Feb. 13, 1986- Joyce and Alison are inhibited from functioning as deacons by the Archbishop. There is no charge or trial. Incumbent, the Rev. Jack Adam, is forbidden to accompany them to the meeting. In response, Bill Whitla and Ian Sowton silence themselves from preaching for the duration of the inhibition.

Summer 1991 – Jim Ferry is outed and removed from his position as rector of St. Philip’s, Unionville, by Bishop Terence Finlay, because of his relationship with another man.

Integrity Toronto holds a service of protest and support for Jim at Holy Trinity, where the group was then holding its regular meetings.

February 1992- Jim Ferry is tried in a ‘bishop’s court’, which draws much publicity and support, including that of US Bishop John Spong.

Nov.- Meredith Hill leaves her position as Assistant Curate at St Stephen’s, Downsview, and begins to worship at Holy Trinity.

May 1992- Meredith is inhibited from functioning as a priest.

1993- Joyce Barnett preaches a homily called “Coming out of Exile.” This and a number of other homilies are collected and edited by Susie Henderson and Jennifer Henry and published by the parish in 1997 under the title, “Dangerous Practice: A Collection of Queer Homilies from the Church of the Holy Trinity.

2002- November- Vivian Harrower and Pauline Bradbrook, with the support of incumbent, Sara Boyles, hold a celebration of their relationship at Holy Trinity, noting that diocesan rules do not allow for the ‘blessing’ of same-gender relationships.

2003- August – Meredith Hill and Eleanor Low are married at their home, with Sara Boyles as a witness and many HT members present.

2003 (Dec.31) – Lionel Ketola and Steve Loweth are married at Holy Trinity. Holy Trinity supports Lionel in his pursuit of ordination within the Evangelical Lutheran Church in Canada. (Lionel subsequently is ordained in the United Church of Canada.)

HT Text Committee develops a marriage rite suitable for use with any couple wishing to be married at HT.

2007- June- The parish sends a memorial to General Synod urging the church to recognize same sex marriage. Just before synod, the parish issues a press release saying that, regardless of the outcome of the synod vote, HT will continue to bless same sex relationships, including marriage.

2010- Jan.23- Raul Morales and Savino Martinez of San Esteban congregation hold a blessing of their civil marriage at Holy Trinity.

2010 – Vestry reaffirms a declaration that HT is ready to perform same-sex blessings or marriages.

2010- spring- HT members protest at ordination services in Toronto and Aurora, calling for justice for lgbt clergy and postulants. 2011 –June – The Rev. Brent Hawkes of Metropolitan Community Church publicly praises the courage of (and cost to) Jim Ferry in challenging the Anglican Church’s policies on gay clergy.

2011- June- Holy Trinity invites other parishes to a meeting to discuss the diocesan guidelines for the blessing of same-gender unions. A resolution is sent to diocesan Synod.

2011 June- Bp. Colin Johnson restored Jim Ferry’s status as ‘priest in good standing’ and appointed him Honorary Assistant at HT. The announcement was made on Pride Sunday!

2011- Fall – HT’s youth delegate to diocesan Synod, Morgan Baskin, speaks eloquently in support of a resolution to be sent to General Synod, calling for the marriage canon to be changed to allow for same- gender marriage. The resolution is accepted despite attempts to derail the vote. 2012 – A service of reconciliation between (retired) Archbishop Terence Finlay and the Rev. Jim Ferry is held at Holy Trinity.

2014 – March – HT Executive writes to Archbishop Colin Johnson, asking him to urge Anglican bishops in Uganda and in Canada and other faith leaders to speak out against draconian anti-gay laws in Africa and injustices elsewhere.

2014- June – As has become our custom, we hoist a banner outdoors: EVERY DAY IS PRIDE DAY AT HOLY TRINITY.

We are gathering online for the foreseeable future. The exact shape of things will change, but you can see some past ones to get a sense. If you would like to join in click here … END_OF_DOCUMENT_TOKEN_TO_BE_REPLACED
View Calendar
Add