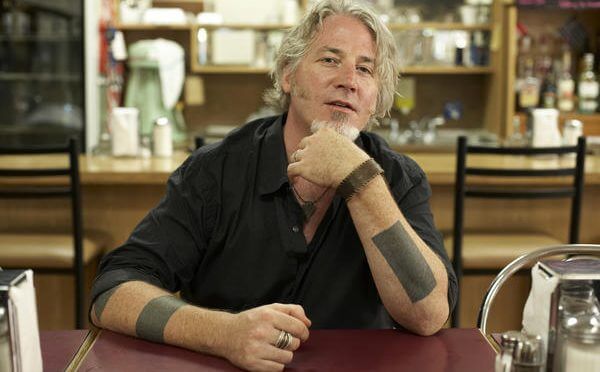 Featured artist this month is Jon Brooks.
“I write songs to calm those who’ve looked into, and seen, what is in their hearts.  I also write songs to terrify those who have not.” — Jon Brooks
Nearing the end of a year of travel in 1997 throughout Eastern Europe, the former Soviet Union, and particularly, throughout war ruined Bosnia-Herzegovina, Jon Brooks discovered what kind of song he wanted to write. In 2005, he began writing and performing that song – the song that looks for the soul of things. In 2010 Jon became the fourth Canadian since 1975 to win the prestigious Kerrville (TX) New Folk Award. Founder of The Kerrville Folk Festival, the late Rod Kennedy, said of Jon: “(Brooks) speaks and sings words that need to be spoken and sung and he does it beautifully, perfectly, and with absolute finesse.” He has now been nominated four times for ‘English Songwriter of the Year’ by the Canadian Folk Music Awards (2007, 2009, 2012, and 2015). Jon’s fifth album, The Smiling and Beautiful Countryside, was released November 1, 2014 by Borealis Records and was nominated for two 2015 Canadian Folk Music Awards: ‘Contemporary Album of the Year’ and ‘English Songwriter of the Year.’
Pay What You Can

We’ll have a kind of cafe gathering every Wednesday from 2:30-3:30pm. Someone will be the host and be online that whole time and folks can drop in and visit at any point during that time. … END_OF_DOCUMENT_TOKEN_TO_BE_REPLACED
View Calendar
Add