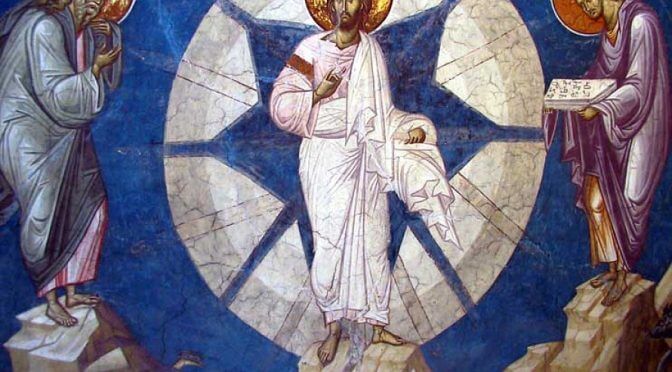 The season of Epiphany always concludes with the story of Jesus’ Transfiguration. This year we have Matthew’s version of the watershed mountain-top moment. It is a revelation, a connecting of dots: a continuity with Moses (whose own mountain-top experience we also heard this today) and the prophet Elijah—icons of the Law and the Prophets—Jesus is part of God’s continuing self-disclosure, and Jesus’ most intimate disciples are there to witness the unforgettable event. And, like a metaphysical bookend, we hear again the words from a cloud that we heard on the first Sunday after the Epiphany, when Jesus was baptized: “This is my Beloved, with whom I am well pleased. Listen to him!” It is also a turning toward Jerusalem and the drama that will take place there.

In John’s gospel, when Jesus is preparing his followers life after he is gone, he intimates that this process of revelation will continue. God still had more to disclose in the future.

The title of today’s homily, “A Crisis is a Terrible Thing to Waste,” was coined in 2004 by the economist, Paul Romer, who is now chief economist at the World Bank. At the time he was referring to the rapidly advancing levels of education in other countries compared to the United States, but Naomi Klein’s book, The Shock Doctrine, a few years later, would demonstrate how disasters can be exploited for political or capital gain. We are witnessing in real-time a geo-political crisis unfolding south of the border that stands to affect the lives of millions of people. Sometimes a crisis is one way of saying “we’ve always done it this way” isn’t working anymore. A crisis presents an opportunity to dare to look at the same scenario and see different possibilities in it. I’ve always loved the story about the child watching a sculptor carving a lion from a block of stone, and asking, “Mister, how did you know that lion was in there?”

We are entering a critical time in the life of Holy Trinity, and we have some big questions staring us down. That is why I asked the parish to begin a strategic planning process last year. In recent years, the parish has been transitioning incrementally in response to the proverb “Necessity is the mother of invention.” For example, the Refugee Committee experienced an injection of new life and energy with younger members joining the Committee who are not members of Holy Trinity. In Anglican Church-land, Average Sunday Attendance (ASA) has been one of the primary metrics that are tracked. But in the emerging reality, the metric that is becoming more relevant is “engagements”—who are you connecting with outside of Sunday morning worship?

Our strategic planning Steering Committee is investigating other possible models of ministry that might work in our context. We are researching and interviewing communities all over North America. We’re reading Fishing Tips: How Curiosity Transformed a Community of Faith, about a congregation in Calgary that has documented their journey. The author, John Pentland, is the minister of Hillhurst United Church, and the book grew from a sermon he preached on a story found in the last chapter of the Gospel of John. The resurrected Jesus encounters some of his disciples fishing. They have been up all night and caught nothing. He suggests they try casting on the other side of the boat. They do, and the catch is overwhelming.

The committee will be engaging members of the Holy Trinity community and others in a variety of ways in the months ahead. There is a take-home question from the Committee that will be unveiled in the Vestry meeting following this service.

The Transfiguration invites us to take away several insights:  it must have been distressing for the disciples who accompany Jesus on the mountain to hear him talk of his impending death; but they would discover that death is not game-over with God. Secondly, with God calling us from the future, we can have hope that we will connect the dots in a way that brings new life. And finally, each of those disciples had unique gifts and a place in transforming the community of Christ into what it became after the crucifixion and life beyond.

God alone knows what the future holds for our community, but I see glimmers of hope in encounters with people who have been touched by our common life. I ran into Jack Birnie at the Open House that Masjid Toronto held yesterday. He had shown up because he read about it on the HT List. Others told me they were going later. We stayed for midday prayers, and afterwards, I met the Imam, Dr. Wael Shehab, who told me he wants to visit us to thank us in person for our support following the protest outside their mosque last week. May this house of prayer continue to be a house of prayer for all people, the way God imagined it in the mind of the prophet Isaiah.

And may the light that drew the Magi from afar to seek and find the Light of Light continue to lead us in our search for wisdom and lives of meaning.

We’ll have a kind of cafe gathering every Wednesday from 2:30-3:30pm. Someone will be the host and be online that whole time and folks can drop in and visit at any point during that time. … END_OF_DOCUMENT_TOKEN_TO_BE_REPLACED
View Calendar
Add