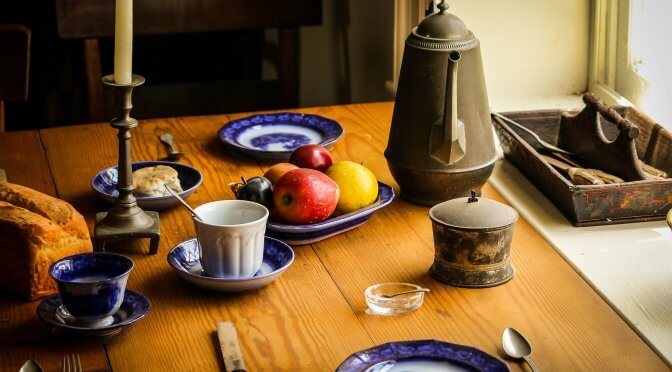 These poems were submitted by Administrator Margot Linken. Says Margot, “One poem, by Marge Piercy, celebrates the Jewish holidays of Rosh Hoshanah and Yom Kippur (Sept 20-22, and Sept 30 respectively, this year) and the other by Edip Cansever, a Turkish poet, is one which I’ve always thought highly eucharistic.”

Coming Up on September
by Marge Piercy

White butterflies, with single
black fingerpaint eyes on their wings
dart and settle, eddy and mate
over the green tangle of vines
in Labor Day morning steam.
The year grinds into ripeness
and rot, grapes darkening,
pears yellowing, the first
Virginia creeper twining crimson,
the grasses, dry straw to burn.
The New Year rises, beckoning
across the umbrellas on the sand.
I begin to reconsider my life.
What is the yield of my impatience?
What is the fruit of my resolve?
I turn from the frantic white dance
over the jungle of productivity
and slowly a niggun slides,
cold water down my throat.
I rest on a leaf spotted red.
Now is the time to let the mind
search backwards like the raven loosed
to see what can feed us.
Now, the time to cast the mind forward
to chart an aerial map of the months.
The New Year*

is a great door
that stands across the evening and Yom
Kippur**
is the second door. Between them
are song and silence, stone and clay pot
to be filled from within myself.
I will find there both ripeness and rot,
What I have left done and undone,
What I must let go with the waning days
and what I must take in.
What I have done and undone,
With the last tomatoes, we harvest the fruit of our lives.

Table
by Edip Cansever
A man filled with the gladness of living
Put his keys on the table.
Put flowers in a copper bowl there.
He put his eggs and milk on the table.
He put there the light that came in through the window.
Sound of a bicycle, sound of a spinning wheel.
The softness of bread and weather he put there.
On the table the man put
Things that happened in his mind.
What he wanted to do in life.
He put that there.
Those he loved, those he didn’t love.
The man put them on the table too.
Three times three make nine.
The man put nine on the table.
He was next to the window next to the sky;
He reached out and placed on the table endlessness.
So many days he had wanted to drink a beer!
He put on the table the pouring of that beer.
He placed there his sleep and his wakefulness;
His hunger and his fullness he placed there.
Now that’s what I call a table!
It didn’t complain at all about the load.
It wobbled once or twice, then stood firm.
The man kept piling things on.

We’ll have a kind of cafe gathering every Wednesday from 2:30-3:30pm. Someone will be the host and be online that whole time and folks can drop in and visit at any point during that time. … END_OF_DOCUMENT_TOKEN_TO_BE_REPLACED
View Calendar
Add