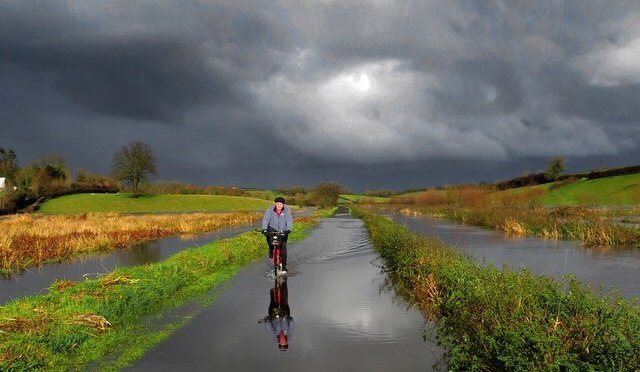 Keith Nunn, Nov 26, 2017.
In case the lectionary readings today didn’t tip you off, this Sunday is called the Reign of Christ. This is the last stop before we start the cycle over with Mary’s story and the infant Jesus.

Co-incidentally, the first sermon I delivered after entering theological education was on the reign of Christ. At that time, I felt a need and pressure to justify my position through scripture. Not so much anymore. However, I do feel a need to maintain the conversation with scripture in general and with the person of Jesus Christ in particular.

Today, in spite of my infamous reputation for jettisoning the lectionary, I have kept all the appointed readings, albeit in abridged form. The straightforward interpretation of these texts probably makes most of us somewhat uncomfortable—I know it does me. I’ll return to them shortly, however.

How abut the “alternate” reading? How does that sit? You might not agree with the author, but I’m guessing that you don’t need me to “unpack” it; or provide social context for the writer. I don’t need to explore the root of the original Greek or Hebrew or Aramaic.

There is no crime in doing any of these things. In fact, in their place, they are very helpful in offering us insights when we need them. I hope that scholars will continue to do that work and share it when they have helpful or fascinating insights that can help us.

However, when they become a tool of apologetics, I reject it categorically. I do not believe that the writings of the prophets, poets and teachers of the ancient Hebrews and Greeks are inherently more valuable than those of our prophets, poets, teachers and activists. Leonard Cohen, Maya Angelou, bell hooks, Martin Luther King Junior, Desmond Cole, Mary Oliver, and many others, including people in this room.

Like those I named, the ancient Hebrews and Greeks can inspire, but not every word is valuable, or helpful, or even true. That is a key reason I often drop or switch readings.

Not this morning though. Today I am going to wrestle with the ancient Greeks and Hebrews; the later compilers of the bible, and the very recent creators of the lectionary.

When I preached on this Sunday almost 30 years ago, I came to the conclusion that we are all the anointed of god. I took my discomfort with the “kingship” of Jesus and blew it open to include all of us. At the time, my preaching supervisor, Don Thompson, was quite surprised that I had preached such a doctrinal sermon.

Kingship is a problematic word, but swapping it in this context of the Reign of Christ would be to ignore the problematic gender dynamic that is the historic and continuing norm in this power-over system of kingship.

The ancient committee that decided the texts of the authorized bible had their own theological axe to grind and chose texts that supported their idea of Jesus’ godhead and the winning Christian agenda of the time. In their feudal world, this image of King Jesus made a lot of sense.

The lectionary committee. What can I say? They are our contemporaries and make their position very clear by their choices of texts to put together today. They pull all sorts of foreshadowing from the Hebrew scriptures and hang it firmly on Jesus with a little help from Paul.

Jesus in these readings is the King of Kings and will bring about a reign of Justice and Peace. But wait for it… Yes, wait for it. We are to wait. It’s coming, really.

That’s what good kings do. That is the feudal contract. Obey the king and he will protect you. If you’re a serf you really don’t have a choice. If you’re noble, well, bide your time, it’s safer. Pay your taxes and the king ensures peace and dispenses justice. Who doesn’t want peace and justice?

In earlier times, when hereditary kings and rulers were the norm, the image of King Jesus—like the familiar rulers, but actually just and caring was probably of comfort.

In a similar way, during the great plagues of Europe in the Middle Ages and the more recent disappearances and torture in Latin America when horrific images of a suffering Jesus, captive and tortured upon the cross, was of comfort. This was a god who knew the suffering of the people.

However, sometimes the images that comfort some trouble others. Didn’t my Lord deliver Daniel? Well, then why hasn’t he delivered everyone? What’s so damn special about Daniel?

As Christians it’s often easier to see ourselves, not as the serfs with no choice, but as the knights, the nobility, agents of the king in bringing justice to the people. We choose and are in turn chosen by the king to act. Maybe a seat in the house of Lords?

Do we long for King Jesus to sweep this aside? Do we see ourselves as the agents of King Jesus imposing the justice of the king on Canada and the world? I doubt it. I know that many in this room are deeply uncomfortable with even the word Lord.

Tommy Airey offers a path out of by making the argument that Jesus never claimed any kind of kingship for himself. He argues that Jesus claimed no divinity either and saw himself as fully human. Well, that screws up our name doesn’t it?

I think that Airey’s image of a Jesus fully claiming his humanity and trying to grow into the love of god holds some strong resonances for us. He played around with the kings justice and opted for the poor and oppressed. He made mistakes and he risked himself. We certainly know that Jesus makes attacks on the rich and powerful. The gospel today is pretty pointed—threatening even—if ultimately toothless. We unfortunately know that there is not going to be a sudden rebalancing—King Jesus is not going to drop in and make it all right.

In the Airey reading he suggests that Jesus was part of an “initiative … ecology or watershed”. I find that very appealing and I bet many of you do too. It allows us to see ourselves as one of “all my relations”—acting to bend the moral arc of the universe towards justice.

This is an opportunity to see the relationship with Jesus as one of kinship and to convert the kingdom into a kin-dom. This let’s us step away from ideas of reign, kingship and dominion and expand our thinking to include all living things in the kin-dom, the family: “All my relations”.

There is more, but I will let it speak for itself. It is a good essay and I encourage you to read the entire thing online.

I’m going to drag us back to this kingship problem though. Like actual hereditary power, it is hard or impossible to walk away from. We don’t get to walk away. It’s bundled in the Christianity we have inherited. This business is going to pop up in the lectionary each year. If we don’t want to deal with this King Jesus stuff, we need to stop reading these lections—at least as a grouping.

But even that won’t do it. The kingship narrative is hammered on all through the nativity story we’ll be wading through shortly. Though in this place, we wish to repudiate power over especially in it’s non-consensual forms of slavery, colonization, sexual assault, systemic poverty and others.

But the fact that we can’t escape the King Jesus narrative, only struggle and fight it, is a reminder that we cannot abdicate our own power and privilege, varied though that is. If we make ourselves powerless by refusing to exercise what little we may have we relinquish our ability to make change to our society.

When those in power fail to fulfill their side of the bargain, bad things happen. John Tory and Kathleen Wynne say they care about the poor, but will appear on CBC Sounds of the Season again this year I’m sure and ask us to give to the food banks to help the hungry. They could fix the problem, they choose not to. They are failing in their duty and don’t even have the grace to admit they’re not seriously trying.

We are in many different places with respect to power and privilege:

If we have any privilege at all, even the dubious privilege of self-awareness empathy, we cannot relinquish it. We are thrown into a position of responsibility we cannot deny:

Since King Jesus is not going to swoop down to fix everything, we must continue to do our best to fulfill the Lord’s feudal responsibilities to protect the weak and to bring justice. And we must continue to call the current earthly powers to account. We can’t do it all, but we can do something.

Fortunately, we are not alone. We are nowhere near as alone as we may think we are. There are all the people in this room, of various gifts. There is a broader community who does care. They just increasingly have trouble even entertaining a relationship with what they understand church to be. I suspect many of us can understand that in our own struggles with the church.

Sometimes we even hear positive words from our leadership and can find moments of hope in announcements to support the rights of indigenous peoples or a new housing investment after more than 20 years.

As we struggle for justice let us also consider how we can maintain our strength in spirit as well as numbers. I’m trying to find that through making different kinds of space to gather people in joy and thoughtful community. I’m doing it through leading Kairos Blanket Exercises. I’m visioning how we might be better able to engage and welcome non-church people who share our values. Imagining what kind of church this city needs in the next 30 years and what we have to let go of to be that.

We have inherited this little piece of the Kin-dom of god. Let us accept our responsibilities with joy. Let us include all our relations as we move forward.

Our children need hope, our city needs hope. Let us look for hope and pedal toward it.