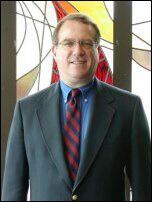 O breaking and entering God:
There is no place we can hide from your presence,
no deadbolt strong enough to keep you from slipping into our midst,
no barricade too high for your Spirit to surmount;
may your Risen Christ steal into our hearts, our imaginations, and empower us to take your message of healing and forgiveness and grace to a broken world.  Amen.

That prayer was inspired both by today’s gospel reading and by a New Yorker cover that has graced the wall of my office for many years—a Charles Addams drawing for a Valentine’s Day issue that depicts the interior of an apartment whose entry door has a deadbolt lock, a sliding bolt, a chain, and a security bar planted at an angle into the floor.  The man who lives there is staring down at a white envelope with a large red heart on it that someone has slipped beneath the barricaded entrance of his secure world.  Ready or not, grace happens.

During the season of Easter, the 50 days between last week and the Feast of Pentecost, we will hear numerous stories of God’s grace breaking into human experience.  Every year on the Sunday after Easter we read the account of the risen Christ appearing to the disciples, who are hiding behind locked doors, fearful that the same authorities who killed Jesus will hunt them down as well.  Running and hiding is a defense mechanism that has served the human race well.  I can still visualize the swashbuckler in some black and white movie from my childhood declaring: “He who fights and runs away lives to fight another day.”  But to live perpetually holed up in fear is not why God put us here.

Thomas, the disciple who missed Jesus’ first resurrection appearance to the cowering disciples, has earned the moniker, Doubting Thomas, for telling his fellows that unless he saw the mark of the nails in Jesus’ hands, and put his finger in the mark of the nails and his hand in Jesus’ side, he would not believe.  It is rather unfair to wag a finger at Thomas for his reaction, because, in the end, we have to acknowledge that without doubt, faith is meaningless.  Or, as Frederick Buechner remarked, “Doubts are the ants in the pants of faith.”1  That is one of the things we can take away from the story of Thomas.

Another is that Jesus gives Thomas what he needs to reassure him of the truth.  As disciples who missed out on Jesus’ appearance on Easter Sunday evening, all of us are in the same position as Thomas was.  The reassurance we are given, though, is not through touching the marks of the nails or the wound in the side.  For us, the real presence of Christ is found in the Eucharist, and when we “take and eat” the bread and wine we are literally touching the One who said “do this to remember me.”  “O taste and see how gracious is Yahweh.”2

Which leads to the third thing we can take away from the encounter of Thomas and the Risen One, namely, that believing is seeing.  What humans believe has always shaped what we see.  The names for planets and constellations come from a pre-Copernican belief system about the universe in which people would look at the night sky and see movements and patterns that led them conclude they were observing the activities of gods and goddesses.  Xenophobic beliefs lead people to see those different from themselves as worthy of all sorts of horrors.  But if we trust God the way Jesus taught us to trust God, our faith opens our eyes to see things with the corrective lenses that Jesus left behind for us, and when we need an adjustment, the Holy Spirit acts as divine optometrist.

Huston Smith, the great scholar of world religions, claims that Christianity’s unique and most significant contribution is the concept of forgiveness.  When we look around at the state of human civilization, we see unending cycles of violence: you hit me, I hit you back.  Jesus knew forgiveness is the only way to break the pattern.
Rowan Williams, from the time he served as a parish priest, wrote: “There is no hope of understanding the Resurrection outside the process of renewing humanity in forgiveness. We are all agreed that the empty tomb proves nothing.  We need to add that no amount of apparitions, however well authenticated, would mean anything either, apart from the testimony of forgiven lives communicating forgiveness.”3  For Thomas and the other disciples, the “resurrection was an experience of forgiveness. The disciples had all abandoned Jesus, becoming complicit with his murderers. The fact that the resurrection was happening to them was an experience of forgiveness for them.”4

In the early centuries of the Christian church, the season of Easter was a period of introducing the newly baptized to the sacred mysteries—particularly the Eucharist, from which the baptismal candidates had been excluded until their baptism at the Easter Vigil.  There is even a fancy Greek word for this practice: mystagogia.  The baptismal covenant is the articulation of Christian identity, and mystagogy is the process of looking deeper into what it means to be on this journey.  For example, what does it mean to “live eucharistically?”  We are taught that the four-fold action of the Eucharist comes from Jesus and the miracle of the loaves where he took the offered loaves, blessed them, broke them, and gave them.

A bunch of years ago, I had a mystagogical moment that opened my eyes to a deeper understanding of living eucharistically.  I was the celebrant and the gifts had been brought to the altar: gifts of bread and wine, and the financial offerings.  As I held the alms basin in my hands I looked down and on top was a five dollar bill on which had been stamped in bold purple block letters: LESBIAN MONEY.  It was a conservative town, so I wouldn’t have been surprised if someone had decided to do some consciousness raising by annotating their currency.  Just as we place the bread and wine on the altar—fruit of the earth and the work of human hands—to be taken, blessed, broken, and shared, our financial offerings—symbols of our life and labour—are also taken, blessed, broken, and shared.  As I looked at that bill I suddenly imagined every bill and envelope sitting there with a unique stamp on it: RETIRED SCHOOLTEACHER MONEY, PHARMACIST MONEY, NURSE MONEY, UNDEREMPLOYED SINGLE MOM MONEY…you get the idea.  St Paul, in his letter to the Christians in Rome, appealed to them to “offer their bodies as a living sacrifice,” or as a modern interpreter has rendered it: “Take your everyday, ordinary life—your sleeping, eating, going-to-work, and walking-around life—and place it before God as an offering.”5  What a contrast from the what’s-in-it-for-me view seen through the eyes of the marketplace.

Last time I preached I mentioned the new Holy Trinity mission statement, which now appears on the front cover of our Sunday bulletin.  A self-described agnostic who read the sermon online told me that he was deeply impressed that our mission statement includes this language, and hence, people like him:

We foster lay leadership, include the doubter and the marginalized, and challenge oppression wherever it may be found.

Wherever we are on our spiritual journey, God invites us to take the risk of observing life through the lens of our faith, evaluating with the mind of Christ, and responding with the empowerment and guidance of the Holy Spirit.

As we encircle the altar today, taste and see that God is gracious, touch the Risen Christ in the gifts of bread and wine and in one another, and may all our doubts lead us ever deeper into the mystery that is God.

4 From Paul Nuechterlein’s notes of Gil Bailie’s lectures on the Gospel of John.

One thought on “Believing Is Seeing”

We’ll have a kind of cafe gathering every Wednesday from 2:30-3:30pm. Someone will be the host and be online that whole time and folks can drop in and visit at any point during that time. … END_OF_DOCUMENT_TOKEN_TO_BE_REPLACED
View Calendar
Add