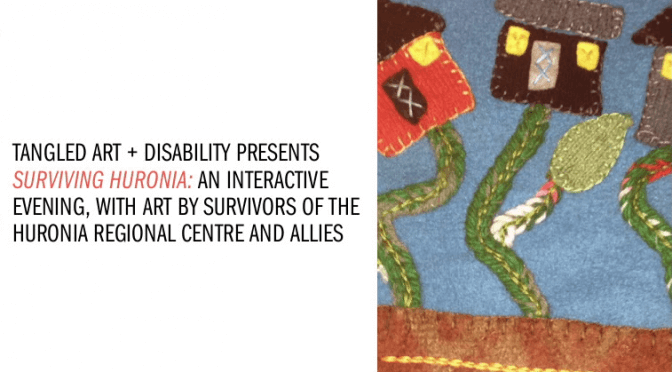 Surviving Huronia: An art show about the Huronia Regional Centre by survivors and their allies on Tuesday, Dec. 2, 2014 6:30-9:00PM

Marie Slark and Patricia Seth will deliver words of welcome and opening remarks at 7 PM. The will speak to their experience of surviving the Huronia Regional Centre, reflect on the class action settlement, and speak to the question, ‘how can art help to bring justice for survivors of Huronia?’

Surviving Huronia is an event that tells the story of the experience of Huronia through first-hand accounts by some of the people who survived it.

Surviving Huronia will showcase textile art, woodwork, photographs, audio-recordings, and stories by former HRC residents including Marie Slark, Patricia Seth, and Brian Logie. This show will also feature a film about Slark’s textile practice, a video of Wynne’s apology and survivors’ responses to it one year later, and a print-out of the names of those who died at Huronia, as well as some interactive activities for all ages.  Some of the artwork will be for sale, so please bring cash.

The event commemorates the International Day of Persons with Disabilities as well as the first anniversary of Premier Wynne’s apology,

There will be difficult, but important, themes of institutional life, including institutional violence and abuse, discussed and represented at this event.

This event is in a barrier-free location. We will have ASL interpreters, attendant care, and supportive listeners. We request that you help us to make this a scent-free environment. For any other accessibility arrangements or questions about accessibility, please contact Eliza at eliza@tangledarts.org by November 25, 2014. This is a child-friendly event and a sober space.

This event is presented by the Surviving Huronia Curatorial Collective and sponsored by Tangled Art + Disability, the School of Disability Studies at Ryerson University, and Project Re•Vision.

From 1876 to 2009, the Huronia Regional Centre (once called the Asylum for Idiots), located in Orillia, ON, contained people who were deemed to have cognitive and other types of developmental disabilities. Some staff of HRC perpetuated systemic physical, sexual, and emotional abuse against its residents. When Toronto Star reporter Pierre Berton visited in 1960, he reported on the abhorrent conditions of HRC, including severe overcrowding, gross neglect, and dilapidation in an article titled “What’s Wrong at Orillia: Out of Sight, Out of Mind” (6, January 1960), writing, “[p]risoners in reformatories have better facilities.” Berton also wrote, “But Orillia’s real problem is one of public neglect. […]. Do not blame present Department of Public Health for Orillia’s condition. Blame yourselves.”

In 2010, Marie Slark and Patricia Seth launched a class action lawsuit against the government titled Dolmage v. The Queen representing over 5000 former residents, and on December 3, 2013, a settlement was approved. Along with a financial compensation, came a public apology by the Ontario government delivered by Premier Kathleen Wynne on December 9, 2013 (to watch this apology, visit https://www.youtube.com/watch?v=WUMUyLKbHJg).

For more information on life at Huronia and the background to the class action suit, please listen to the radio documentary The Gristle in the Stew: http://www.cbc.ca/thesundayedition/documentaries/2012/08/12/the-gristle-in-the-stew-1/. Please note that this was first broadcast November 27, 2011, before the class action suit had been won.

We’ll have a kind of cafe gathering every Wednesday from 2:30-3:30pm. Someone will be the host and be online that whole time and folks can drop in and visit at any point during that time. … END_OF_DOCUMENT_TOKEN_TO_BE_REPLACED
View Calendar
Add