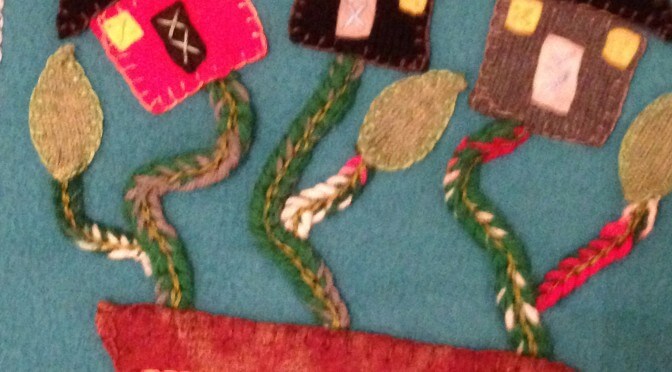 Today’s two Bible readings involve Faith and Mystery.
The Doxology in Romans tells the faithful that God “alone is wise.”
And we read in Luke that “Nothing will be impossible with God”:

Here, Mary and Elizabeth faithfully accept the mystery that pregnancy involves for every woman, but especially for them.
Their babies will fulfill predictions in the Old Testament.

How puzzling that the Messiah will come – not as a King…
but as a baby born into very humble and risky circumstances.
We know that the message he will one day communicate will be full of tensions, riddles and paradoxes.
People who are poor, sad, insulted, isolated, and persecuted are to have high status in this new kingdom … how can that be?
The Gospel radically challenges relationships of power.

The mystery that comes true in the Gospel goes beyond what had been predicted – reaches beyond the Hebrew world.
This message – this opportunity – is for all people.

Do we really mean ALL?
ALL as equals?
Or only ALL that are able?

We have absorbed assumptions about ability since our infancy:

But does it mean that those who do not follow those typical patterns are faulty? Less worthy of respect?
Is it wrong to require more help and greater patience?

Should meeting those developmental milestones later in life – or never – condemn a person to a lesser life?

When many things about life are arranged as if on a rigid schedule, those who are “late” may miss the “journey” altogether.

In fact, we sometimes push others off the “train” of life – in our rush to get ahead.
More room for me! Me first!

Too often, we don’t even realize who’s missing.
A Toronto parent recently told me she is comfortable talking to her child about someone with a vagina who wants to be a boy, but she is terrified around people with disabilities. She attended school in Toronto, where children with disabilities are still sent out of their neighbourhoods to segregated classes and schools – 4 times as often as in other school boards in Ontario.

We sort people into spurious disability categories – idiot, imbecile, moron – and then turn those words into jokes.
The R-word has done huge harm.
And check how often people use the 4 letter L-word – “lame”, meaning “inadequate”.

What happens to those who are segregated from society due to perceived disability?
Most of us have no idea!

But our rejection of other styles and paces of learning and living can be extremely cruel.

How else can you explain an institution like the former Huronia Regional Centre in Orillia?

HRC didn’t close until 2009.
Since then, Marie Slark, Patricia Seth, Jim and I have led the class action against the Ontario government concerning systemic neglect and abuse of people who lived at HRC.
The Settlement reached late last year involved token financial compensation for those who made claims, memorials, and the government apology you heard in our first reading.

We met with survivors, reviewed their files and visited the empty institution with them.
Some do not communicate with words, but through behaviour and the arts.
These extremely courageous people revealed – and relived – details about the horrors they experienced.
Difficult as it was, people have been relieved to finally be believed.

We have a list of some of the 1500 people buried in unmarked graves – please join me after the service, if you would like to write the Premier to ask that their graves be marked.

Almost 3500 people have submitted claims in the Huronia and the 2 other institution class actions that followed.
80% of those claims were detailed and serious.
Claimants should receive cheques sometime next Spring.

But perhaps 4500 other eligible people did not make claims.
We are certain that everyone was harmed – but many have no allies to understand and assist them.
Too many people in Ontario with intellectual disabilities are still segregated, isolated and devalued – “out of sight; out of mind”.

Some people who identify as “autistic” say there is richness in what they call their “neurodiversity”.
What others see negatively is just another natural form of human difference – like gender, race, sexual orientation.
The life experiences we consider “normal”, they call “neurotypical”.

Nick Walker is an autistic writer and educator from California, who was recently asked to offer advice to neurotypical people – parents and professionals – working with neurodivergent people.
Just as colonialists subjugated indigenous people, he sees that therapists have lacked empathy, have refused to learn the communication and respect the culture of neurodiversity.
He quotes Karl Deutsch – that “power is the ability not to have to learn”.
Now Walker says we should “throw out everything we have learned based on the pathology paradigm”.
He says it’s just as wrong to call autism a disorder as it is to call homosexuality a disorder, to call non-white people “savages”.
And it’s as harmful to force changes in behaviour as it is to try to change a person’s sexual orientation.
Instead Liberation Psychology addresses the struggles created by social injustice, and helps people understand oppression as a cause of their suffering.

Surely the kingdom of God includes people of ALL abilities.
We must not pressure others to “hurry” and to change; instead we need to challenge exclusion and change cultural norms.

And if we stop judging others, we may go easier on ourselves too. After all, any one of us might sometime need help to walk. We are all likely to be at a loss for words – temporarily or permanently. And regardless of what we learned on the potty as toddlers, life can still be worth living if we need help in the bathroom.

We are far richer if we accept help and enjoy diversity.
It can be a huge relief to see life as a journey, not a race.

In closing, let’s turn to our first reading – that radical and paradoxical message from the government of Ontario14.
The powerful people in charge now admit they got it very wrong.
The people society deemed slow and not smart knew better all along – that institutions have hurt everyone.

As we remember the mysteries of faith, we need to RE-MEMBER our communities, to defend rights and find right relationships.

However –
that God “alone is wise”
and that “nothing will be impossible with God”
surely are not messages about waiting passively.

When God’s love comes as a vulnerable baby into a dangerous world, we must envision radical change and work to achieve it.

During Advent, after the longest night, what are we waiting for?

We’ll have a kind of cafe gathering every Wednesday from 2:30-3:30pm. Someone will be the host and be online that whole time and folks can drop in and visit at any point during that time. … END_OF_DOCUMENT_TOKEN_TO_BE_REPLACED
View Calendar
Add