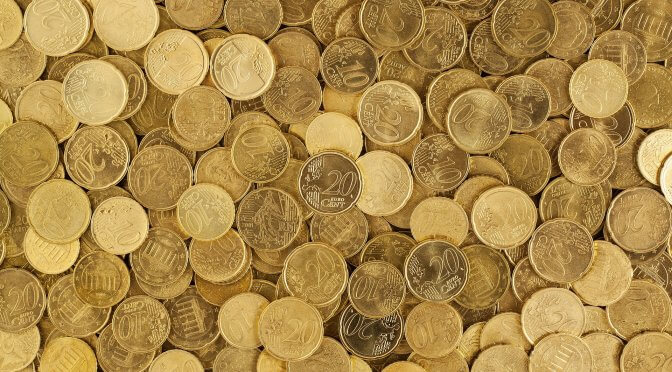 Sunday, February 25 is not only our annual Vestry meeting at Church of the Holy Trinity – Trinity Square; it’s also the final Sunday in our current pre-worship forum series on Archbishop of Canterbury Justin Welby’s Lenten book “Dethroning Mammon, Making Money Serve Grace”. Make sure to mark your calendar for 9 am in the Trinity Cafe, followed by morning worship and then Vestry.

During our first five weeks with the ABC’s book, we have:

This morning, we had a very lively discussion as we began to look at an economy of grace, an economy of abundance and generosity. The market-based economy calls for an exchange, often based on a notion of scarcity: There is a limited supply of a particular good, and the seller is entitled to profit from its sale. As market exchanges accelerate, it becomes a process of “beggar your neighbour”.
Now imagine an economics based on sharing and abundance, a Biblical economy. This morning, our group looked at two examples of generosity:
First, the Marshall Plan – the post-second-world-war loan and grant program by the US government to Europe, which was – in financial terms – undeniably big. But there were strings attached to the dollars. Most of the strings were designed to bind European countries to the US: Money as an instrument of political control.
https://www.youtube.com/watch?v=zr_XN7A8Cgc
Second, the work of the Primate’s World Relief and Development Fund in Masasi, Tanzania – where the funding is not quite the billions of the Marshall Plan, though it also has strings attached. But the PWRDF strings are of an entirely different sort – not to bind them to Canada, nor to buy converts to Anglicanism. The goal was to meet immediate needs for food and water, while building a community-based local economy.
https://www.youtube.com/watch?v=c_kXREw448o
Archbishop Justin sets out three guidelines for an economy of grace, abundance and generosity:
First, “we need to train ourselves to see the world in terms of abundance and generosity”. We’re so used to swimming in an economic system that tells us that competition and scarcity are the natural order. We have to cling onto what we have, and work feverishly to gain more. Yes, there are economic and business practices that threaten our planet, but there are sustainable ways to live together bountifully.
Second, “we need to recognize that there is a political aspect to our actions”. Foreign aid is a terribly small part of Canada’s national budget, but it is one expression of Canadian values. And, for instance, when a Canadian crown corporation proposes to sell Canadian helicopters to a government with a horrific human rights record, Canadians are right to condemn this international transaction.
(Update: After public pressure prompted Canada to review the proposed helicopter sale, the Philippines said it no longer wanted the choppers – https://www.thestar.com/news/world/2018/02/09/philippine-president-duterte-halts-purchase-of-16-canadian-helicopters.html – a victory for those who believe that economic transactions should serve people and uphold their dignity).
Third, “we should see money as an instrument that enables us to build relationships of abundance and grace”. A different and better economy can be built through transactions that affirm agency and build co-operative relationships. We learned in the PWRDF video of a process that Tanzanians call “pass on the gift”: “If you get a goat, that is a gift from God, so you also have to pass that gift to others.”
But is a new world really possible?
In our final week, on February 25, we take up the final chapter of Archbishop Justin’s book. “We may think it is unpleasant to have Mammon on the throne, but, at the same time, we have a nasty suspicion that this false god is pretty firmly stuck in the seat, and that the alternatives are too dreadful to contemplate,” writes the ABC.
Everyone is welcome at 9 am on Sunday, February 25, for our final conversation on “DeThroning Mammon: Making Money Serve Grace”. You don’t need to have attended any of the previous sessions. We’ll read together from the Archbishop’s book, watch a couple of videos, gain some wisdom from the Bible and share our ideas.
————————————————————————–

“Money and power are closely related. It is almost impossible to see the impact of one without understanding the desire for the other.. Power flows to a large degree from money. And money is easier to acquire when one has power. One of the characteristics of poverty is that you are the object of other people’s power, rather than the subject who decides what to do with your own power.”

With those words, Archbishop of Canterbury Justin Welby opens Chapter 4 of his book “Dethroning Mammon: Making Money Serve Grace.” We gathered at 9 am on February 11th for week four of our series on money, the power of money and the desire for money.
Take a look at Proverbs 22:7: “The rich lord it over the poor; the borrower becomes the lender’s slave.” The Bible has lots to say about money. In the Hebrew Bible, there are rules about the ethical exchange of money – especially about charging interests on loans, a practice called usury. For a quick overview of usury, take a look at this video, which notes that the medieval church began to change the notion of usury from a prohibition on charging any interest to a prohibition on charging ‘excessive’ interest:
https://www.youtube.com/watch?v=yNtIrr3U16U
In the New Testament, the toxic quality of wealth is explored in many passages (the rich man and the eye of the needle, etc.) and early Church theologians developed a notion that the love of money actually stains a person’s very soul, not just in this lifetime but for all of eternity. Consider the story of Lazarus and the rich man (Luke 16:19-31). Even after he was shot down to Hades for his sins, the parable tells us that the rich man was so full of hubris that he thought he could order Lazarus to bring some water to him for relief.
Money has a practical value, of course. It can be used to purchase useful things – like medicine, or housing, or food. But, as Archbishop Justin notes, “the interaction between money and power is complex and deceptive”.
Making money from money – the compounding of money through interest rates – is the primary way that rich people get richer. In our global economic system, those who are already wealthy can double and triple their wealth by the compounding effect of interest, but those who are poor have nothing to invest. The system was built by people with money to serve the interests of money and the wealthy.
After four weeks in our current series of pre-worship forums (9am in the Trinity Square cafe), we are at a bit of a turning point. In today’s session, we watched a short video with the former Archbishop of Canterbury Rowan Williams who spoke about the role that local churches can play in practical support and capacity-building for those who have been pushed to the economic and social margins.
For instance, the Church of England has supported the development of local credit unions as an alternative to mainstream financial enterprises, and some rural churches host the local post office (in the UK, the post office has a financial function as well as delivery of mail).
Here is the video from the UK Church Urban Fund:
https://www.youtube.com/watch?v=GXhoJKl4YWg
Next Sunday at 9 am, we turn to practical responses to the dominant economy. This economy serves the interests of those who have power to enter and control the markets, and who benefit from the compounding interest as money begets more money.
What would it be like to have an economy based on generosity and trust, on abundance and grace – in other words, a Christian economy?
How can we get from here to there?
Do I get to keep my iPhone?
Please join us on Sunday at 9 am in the Trinity Square cafe. We’ll read together from Archbishop Justin’s book, we’ll view some videos, and we will share ideas and inspiration. Everyone is welcome, and you don’t have to have attended previous sessions.
Thanks.
– Michael  Shapcott

Ever wonder why some people will describe a rich person as “being of independent means”? Could it possibly be that money, in addition to buying useful things (like housing, and food, and medicine), buys “independence” and even power, including power over those who are less financially endowed?

In week four of our pre-Lenten series “Dethroning Mammon”, we dive deep into the twisted relationship between money and power. Archbishop of Canterbury Justin Welby writes: “The interaction between money and power is complex and it is deceptive.” Wealthy countries, wealthy corporations and wealthy individuals are able to dominate, and then rig the system in ways that bring more economic benefits to themselves.

“The economic wealth of historically Christian countries, and those whose development was influenced by them, means that the international financial system is based around the use of interest, and models of financial transactions that derive from the Protestant Christian tradition… at their heart is acceptance, against a centuries-old trend, of interest as first a legitimate and ultimately a core aspect of trade and commerce. We are so used to this assumption that we forget how shocking it would have been to many Christians before the Reformation and would still be to adherents of many other faiths today,” writes Archbishop Justin in Dethroning Mammon: Making Money Serve Grace (the book that is helping to guide us through our current pre-worship forum).

Week four of our pre-worship forum – Sunday at 9 am in the Trinity Cafe – draws from the chapter in Archbishop Justin’s book titled: “What we receive we treat as ours”. Money leads to power which leads to more money which leads to more power. Such is the way of the world. We not only think that this is “natural” but that the rich deserve everything that they receive. Or, we fall into envy and despair at the arrogance of the rich, as in Psalm 73:12-13:
“Such are the wicked;
unshakeably secure, they pile up wealth.
Indeed, it was all for nothing that I kept
my heart pure
and washed my hands free from guilt!”

Everyone is most welcome to join us on Sunday at 9 am – no advance reading is required. We’ll view a short video, read from Archbishop Justin’s book, look at Biblical passages, and share thoughts and ideas.

See you on Sunday at 9 am. – Michael Shapcott

We’ll have a kind of cafe gathering every Wednesday from 2:30-3:30pm. Someone will be the host and be online that whole time and folks can drop in and visit at any point during that time. … END_OF_DOCUMENT_TOKEN_TO_BE_REPLACED
View Calendar
Add