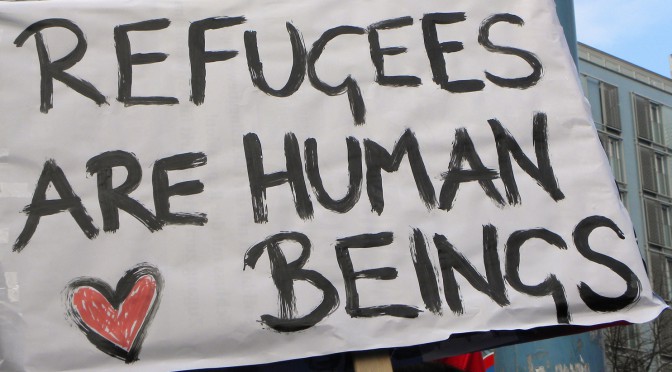 Church of the Holy Trinity has joined 160 organizations across Canada in opposing provisions in the budget bill (Bill C-43) that would open to the door to refugee claimants being denied social assistance.

In an open letter to Minister of Finance Joe Oliver sent today (November 18) the organizations ask for the withdrawal of sections 172 and 173 of the bill, which would allow provinces to deny social assistance based on immigration status.

Refugee claimants, who are among the most vulnerable in our society, could be denied the crucial lifeline that allows them to survive and begin to rebuild their lives in Canada.

This legislative initiative is similar to the denial of healthcare to refugee claimants, which the Federal Court recently ruled was “cruel and unusual”.

The organizations signing the letter represent a wide range of sectors, including health, poverty, human rights, faith communities, refugees, women and legal advocates. The letter is signed by national as well as regional and local organizations from across the country.

The letter and list of signatories is below and as a pdf file.

Please join us in opposing this move by signing this online petition at: https://www.change.org/p/stephen-harper-stop-the-budget-bill-from-denying-refugee-claimants-social-assistance.

Thank you for your support,
Church of the Holy Trinity

The Honourable Joe Oliver, MP, PC
Minister of Finance
House of Commons
Ottawa, ON K1A 0A6

As organizations that have an interest in ensuring that everyone in Canada has equal access to income security, we are alarmed by the inclusion of sections 172 and 173 in your recently introduced omnibus Budget Bill C-43. These sections amend the Federal-Provincial Fiscal Arrangements Act and are essentially Private Members Bill C-585, which was introduced earlier this year.

Many of our organizations are health and social service agencies and legal and community advocates that work directly with refugee claimants and others with precarious immigration status. The change that would be made to the Federal-Provincial Fiscal Arrangements Act as a result of these provisions would allow provinces to restrict access to social assistance for refugee claimants and others who have not yet been granted permanent residence.

To receive social assistance in any province, one must already qualify through testing and demonstrate great need. To then deny social assistance based on immigration status is to cruelly deny the most vulnerable in our society the crucial lifeline that allows them to survive.

A Federal Court recently described your government’s denial of healthcare to refugee claimants as “cruel and unusual”. It is disturbing to see another initiative in Parliament that seems to be using legislation to threaten the well-being of migrants attempting to navigate Canada’s immigration system.

Fleeing persecution places tremendous stress and burden on families seeking refugee status in Canada. Some of these families suffer from post traumatic stress disorder that can make finding and holding a job difficult without appropriate health care. Work permits take time to be approved and issued, which leaves people with no source of income for months on end. In the interim, access to social assistance is vital to sustain and rebuild lives. Without that source of support, many will be unable to feed, house, or clothe themselves and their families, putting further pressure on already overburdened charities and shelters. We know that poverty leads to poor health outcomes including higher rates of diabetes, heart disease, cancer and depression. We also know that denying basic social benefits, particularly to refugees, contravenes the spirit and letter of numerous international human rights obligations that are binding on Canada, including the International Covenant on Civil and Political Rights, the International Covenant on Economic, Social and Cultural Rights, the Convention on the Rights of the Child, and the Convention relating to the Status of Refugees. It is unacceptable for our government to implement policies that worsen people’s health and deny their fundamental human rights.

We are also concerned that such a significant legislative change is being included in an omnibus Budget Bill, after being introduced as a Private Members Bill. These are inappropriate processes to deal with such a critical issue as access to basic social benefits. This is particularly the case since these provisions will have far reaching negative consequences for the health, income security, stability, and successful settlement of very vulnerable people who have come to Canada seeking shelter from war and persecution.

Our organizations call on you to withdraw sections 172 and 173 from Bill C-43. We will be making this Open Letter public and will continue to raise this issue with you, your MP colleagues, and the general public.

We’ll have a kind of cafe gathering every Wednesday from 2:30-3:30pm. Someone will be the host and be online that whole time and folks can drop in and visit at any point during that time. … END_OF_DOCUMENT_TOKEN_TO_BE_REPLACED
View Calendar
Add