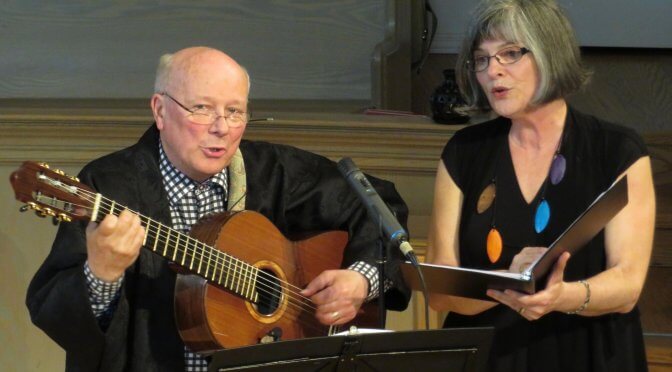 Holy Trinity invited Andrew Donaldson to coordinate music for our Advent Sundays. He and his wife, Wendy, have been part of our Advent Planning Team, along with Susie Henderson, Jennifer Henry, Clara Pasieka and Sherman Hesselgrave. Andrew will also collaborate with the Fallen Angles on the service for Advent IV. Several of their friends have also joined Holy Trinity’s singers to prepare and lead congregational songs on Sundays.

I became acquainted with Andrew and Wendy this past summer at the Hymn Society in the United States and Canada’s annual convention, held this year in Waterloo. They were leaders of a hymn festival that was a highlight of that week for me.

My wife Wendy Wyatt Donaldson and I have worked in many contexts to build singing communities of faith. I was Music Director at Beaches Presbyterian Church (Toronto) for two decades, and Pastoral Musician for seven years at Trafalgar Presbyterian Church (Oakville, Ontario). My ensemble, Hilariter singers and players, have recorded CDs and performed throughout Ontario. For five years I worked as Worship Consultant to the World Council of Churches in Geneva, where I planned and led worship for people of many faiths and the WCC’s global Assembly in Busan, Korea.

We are delighted to welcome them to our community and for their music leadership during this important season of the church year.

We’ll have a kind of cafe gathering every Wednesday from 2:30-3:30pm. Someone will be the host and be online that whole time and folks can drop in and visit at any point during that time. … END_OF_DOCUMENT_TOKEN_TO_BE_REPLACED
View Calendar
Add