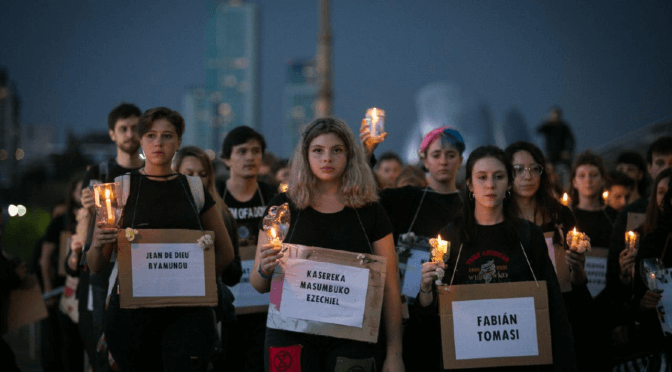 At Holy Trinity, we often recall those who have gone before us. There are many from our local community and beyond who are named in our litany of the Saints. This post landed in my mailbox from the folks at Extinction Rebellion and caught my eye as a beautiful tribute to the many who have paid for their defence of land and water with their lives. And with appreciation for the growing numbers who are defending our common future.
Presente!

Day of the Defenders

9 OCT | Buenos Aires, Santiago, Islamabad, Dublin, Cape Town, London
Last year, 164 activists were killed in the Global South for trying to defend their lands from corporate extractivism. Yesterday, rebels all over the world held vigils to honour them, coming together in a global solidarity action.

In Buenos Aires, a large group walked to the UN building, each member dressed in black, holding a candle, and carrying a sign bearing the name of one of the 164 murdered activists. They read out a statement and knelt on the pavement to write the names of the fallen activists on the ground in chalk.

In Santiago, rebels took part in a solemn procession which brought them to the main historical square Plaza de Armas. They held a vigil to commemorate the 164, first by speaking out every name in turn and then by observing a minute’s silence in which to contemplate the incredible sacrifice that had been made.

We’ll have a kind of cafe gathering every Wednesday from 2:30-3:30pm. Someone will be the host and be online that whole time and folks can drop in and visit at any point during that time. … END_OF_DOCUMENT_TOKEN_TO_BE_REPLACED
View Calendar
Add